The "critical point test" (aka "scissors test") requires that if any one item fails, nobody should be injured.

A "bend" is a knot that joins two ropes.

A "hitch" is a type of knot that must be tied around another object.

The "whistle test" requires that if all rescuers let go, nobody should be injured.

The T-System, which is sometimes referred to as the T-Method or the "adding the tensions" method, is a versatile way to calculate the mechanical advantage of a rope-and-pulley system. Although the T-System may appear complicated, it really isn't. The only math that is required is adding a few one-digit numbers.

The T-System can solve relatively complicated systems including all of the mechanical advantage systems on RopeRescueTraining.com. However, the T-System cannot solve every system imaginable. It works great on simple and compound rigging systems, but it can get overwhelmed by some complex systems.

The T-System always assumes that the pulleys are frictionless and that the ropes make 180-degree turns around the pulleys.

The T-System can be completed in four steps:

The first step is so easy it barely deserves to be called a "step," but write "T1" next to the rope where the rescuers will be pulling. 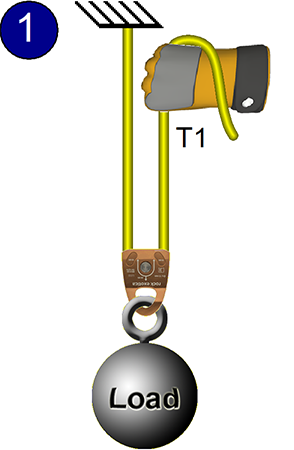 Step 2. Draw three blank lines next to each pulley.

Draw blank lines where the rope enters and exits the pulley, and draw a third blank line near the eye of the pulley. We will use these blank lines to record the T values.

(The "T" in the T-System refers to "tension." We prefix the numbers with a "T" to remind us that we're comparing the tension within the system.) 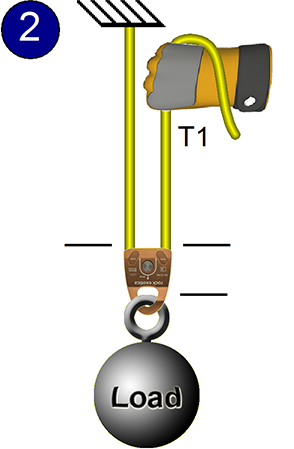 Step 3. Fill in the blanks.

This step is a little more complicated:

Repeat this process by moving down the rope and writing the three T values next to any additional pulleys, until you reach the end of the rope. 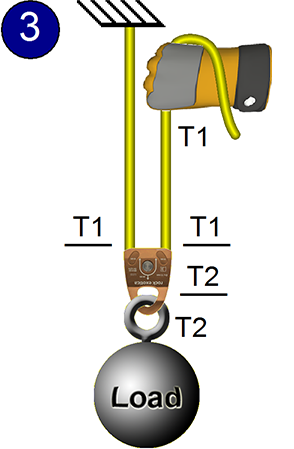 The mechanical advantage is the number on the load compared to the number near the puller (which will always be "1"). The load in the above example is labeled T2 so this is a 2:1 system.

The first two steps have been completed in this illustration:

Step 2. Draw three blank lines next to each pulley. 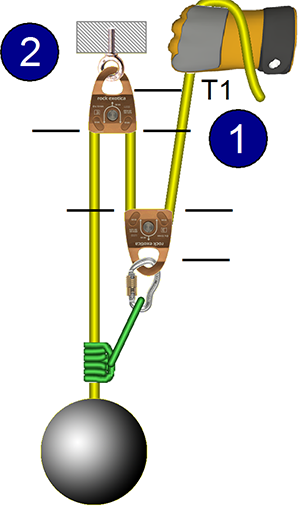 Step 3 is a little more complicated.

Per the rules, we labeled the carabiner and Prusik with the same value as the pulley's eye (T2). (We labeled the values that aren't associated with pulleys in red.)

As we continued along the rope, the upper pulley and anchor were labeled in a similar manner (T1, T1, and T2).

Here's where it gets a little tricky. The T2 from the Prusik and the T1 from the rope combine to T3 just below the Prusik, so there is T3 at the load (i.e., a 3:1 system). 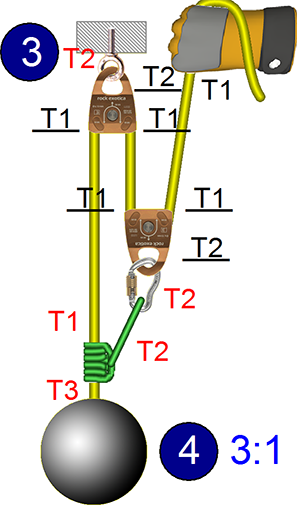 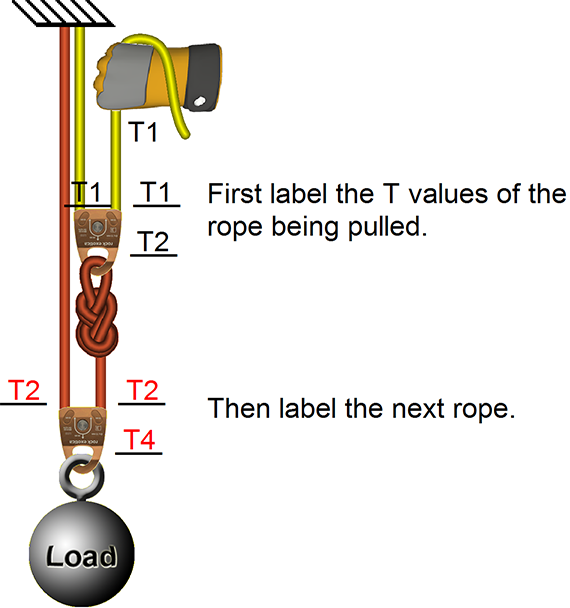 See if you can use the T-System to solve the following systems. (Click on the illustrations to enlarge them.) 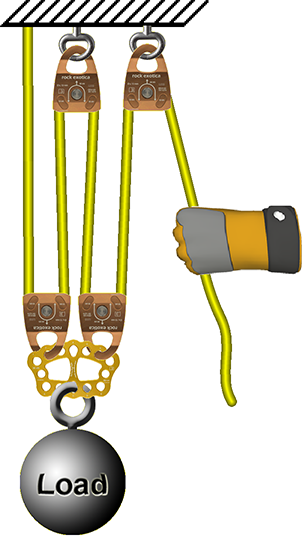 The T-System is a handy method of calculating mechanical advantage. You start where the rescuers will pull on the rope and write down "T values" at each pulley. The T values of the ropes entering and exiting each pulley must be the same, and the value at the eye of the pulley must be the sum of the entry and exit values. When T values join, such as at Prusiks or rigging plates, you sum the values. When you are done, the value at the load is the mechanical advantage.

Stuck indoors?
Wish you were rigging?
You could be.

Next Topic: Calculating MA by Counting the Lines