The previous page contained an overview of anchors. This page discusses various types of anchors.

Single-point anchors are probably the most common type of anchor. They only require a single strong anchoring point and can be tied quickly.

Commercial anchor straps are manufactured with D-Rings pre-sewn into both ends. They are popular in urban and industrial rescue because they can be attached quickly without tying a knot. The single-purpose use of anchor straps make them less popular in backcountry rescue.

A single loop of webbing, or cord, is also a popular anchoring technique. The loop is typically creating by tying a water knot when using webbing or a bowline when using cord.

The advantages of single-loop anchors are they can be created from standard materials (i.e., cord or webbing) and they require less material than most single-point anchors (e.g., a basket or girth hitch). A disadvantage of single loop anchors is that, unlike wrap-3-pull-2 and girth hitch anchors, they don't cinch onto the anchor and might slide up or down. Another small disadvantage is the knot must be tied after the rope is wrapped around the object.

Wrap-3-pull-2 anchors (and wrap-2-pull-1 anchors) are created by wrapping rope or webbing around an object multiple times and then connecting a carabiner to all but one of the strands of rope. 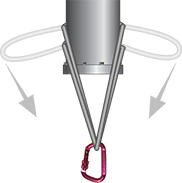 A girth hitch anchor is created by wrapping a pre-tied (or sewn) loop around an object and then passing one end of the loop through the other end—creating a girth hitch around the object.

As with basket hitch anchors, girth hitch anchors can be pre-tied using standard materials and assembled quickly. A disadvantage of girth hitch anchors is that if they are positioned incorrectly on the object (see illustration), they can create 2:1 leverage on the "hitch" which could cause the nylon-on-nylon to fail. This is easy to resolve with proper positioning, but it must be consciously recognized by the rescuers.

Multi-point anchors have two disadvantages. First, and obviously, they require more time and material to build. Secondly, when tied incorrectly the angle of the ropes connecting to the anchors can create more force on the anchors than the load itself. You can learn about the force-multiplying effects of rope angles.

Multi-Point Anchors to Accommodate the Direction of Pull 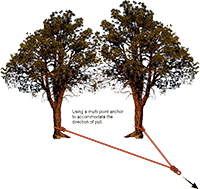 If you build a multi-point anchor because the individual objects aren't as strong as you would like, it is important to consider what would happen if one of the anchors failed. Specifically, if one of the anchors fails it should not be possible for the rope to unthread from the remaining objects and drop the load. Similarly, the failure of one anchor should not induce a significant amount of slack into the system (i.e., to "extend") which would result in a shock load on the remaining anchors. The piton anchor shown here addresses both of those concerns.