The angle of ropes that are connected to anchors can have a tremendous affect on forces.

This system has a 100-pound load suspended from two anchors. The two ropes are basically parallel which creates an angle of approximately 0°. In this case, each anchor is holding half of the load (i.e., 50 pounds).

(You can mentally replace the word "pounds" with "kilograms" throughout this page.)

This system has the same 100-pound load suspended from two anchors, but this time the angle between the two ropes is 90°. In this case, each anchor is holding approximately 70 pounds. Yes, the 100‑pound load is actually generating 140 pounds of force (i.e., 2 x 70 pounds)!

This table shows the force-multiplying effects of rope angles. The left-hand column is the angle between the ropes and the right hand column is the force that would be applied to each rope and anchor. (Again, you can mentally replace the term "pounds" in this table with "kilograms.")

You can see that when the angle between the ropes is 120 degrees, each rope will receive forces equivalent to the entire load (in this case, 100 pounds). The 120-degree angle is sometimes referred to as the "critical angle" to remind rescuers that exceeding 120 degrees will result in more than 100% of the load being applied to each rope.

This chart shows how forces increase dramatically as the angles between the ropes increase. 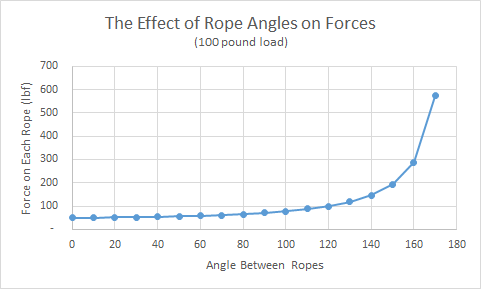 You can use this calculator to calculate forces that are generated by any load at any angle.

So how can the 100-pound load in this 150-degree system generate more than 190 pounds on two anchors? That is a total of ~380 pounds being generated by a single 100-pound load!

In fact, each anchor is still receiving only 50 pounds of vertical force from the 100-pound load. However, the load is also pulling the two anchors horizontally toward each other as shown in this illustration.

The 50 pounds of vertical force, run through a little trigonometry, generates a net diagonal force of 193 pounds.

You do not need to understand the trigonometry that is used to calculate these forces (and vRigger can do this math for you), but every rescuer must know that wide-rope-angles can generate massive forces that can easily exceed the load's weight (e.g., in the above example, the 100-pound load is generating approximately 380 pounds of force).

vRigger costs less than a rope.