Three-to-one systems are often called "z-rigs" due to their shape. Don't, however, confuse the 3:1 with the similarly-shaped 2:1 with a COD pulley or a 2:1 piggyback system.

The following illustrations show 3:1 systems without and with a COD pulley. 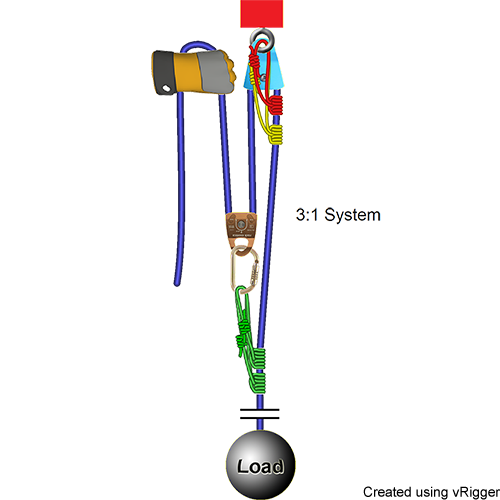 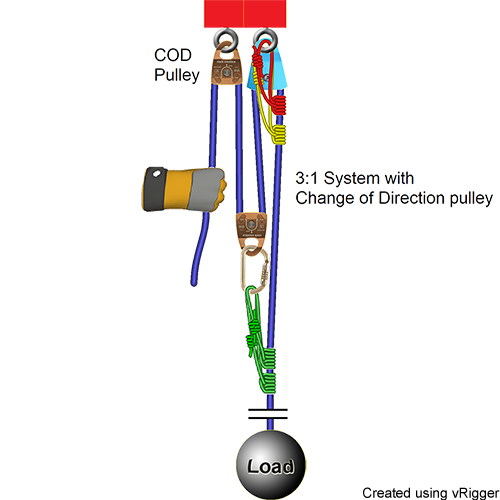 Some rescuers find it challenging to remember how to rig a 3:1 system. The following process may make it easier to remember:

This approach of first rigging a 1:1 system and then, if required, adding a traveling Prusik and pulley simplifies the rigging of a 3:1 system.

Looking at the above 3:1 systems, you can see that eventually the pulleys will touch. The system needs to be "reset" just before they touch:

It is obviously beneficial to have a large rigging area to reset the system. If there are only 3 meters between the pulleys in your 3:1 mechanical advantage system, you'll have to reset every time you pull 3 meters of rope and your load will have only have raised 1 meter. If you have to raise the load 30 meters, you'll need to reset the system 30 times! If you have a limited work area, it may be advantageous to put a COD pulley at the main anchor and build your mechanical advantage system elsewhere, as shown in this next illustration.

In the above system, the capture Prusiks could be on the COD pulley (as shown) or on the rightmost pulley.

It should go without saying, but the above illustration focuses on the raising system and ignores important details, like having an independent belay to protect the litter attendant and victim, having the three rescuers secured with tethers, etc.